Previous Guest Bios
​Click here to see video recordings of our Networking Breakfast Speakers, graciously provided by Bloomfield Community Television.
Here is a link to a video recording of our 2020 Annual Meeting held on Zoom, June 12, 2020.
Click the link above--Previous Guest Bios--to see links to the brief biographies of our past speakers.
Our esteemed speakers for this Nuts & Bolts Training session were:
(click on the speakers name to see her brief bio)

Thank you, to our three speakers from March 26, 2021, who offered us an inspiring overview of the opportunities that exist to serve the public through appointed positions.
​

​(Click on our speaker's photos to be taken to their biographies)

Our most recently in person Networking Breakfast, held on December 13, 2019

​We had a dynamic young leader from HAVEN speak with us about the work they are doing. Melissa was joined by a client of HAVEN's who has successfully regained her autonomy and voice and was able to tell us very eloquently about her story. It was a powerful morning and we thank both of our speakers, one whose name must be withheld for her own safety.

Unfortunately, we were unable to get a video recording at this breakfast meeting as we do at most. If you'd like to see the presentations made at any of our earlier Networking Breakfasts, click here.
​On September 6, 2019 we had three WONder Women Alumnea as our speakers: 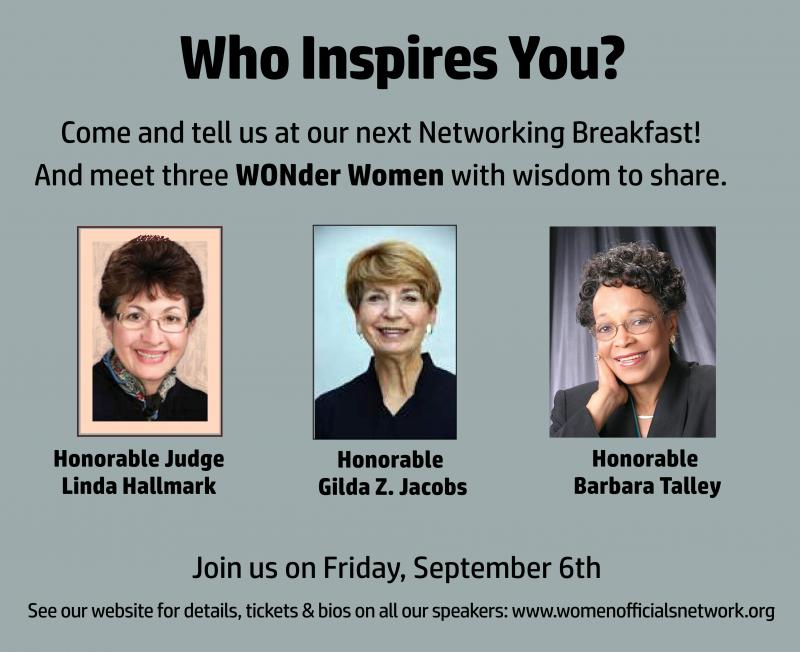 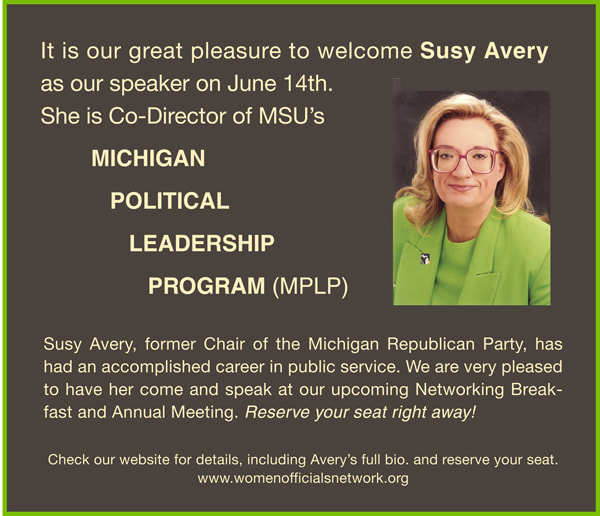 Click here to see a video recording of the presentation.
On March 29, 2019 we had the wonderful Anne Doyle as our speaker: 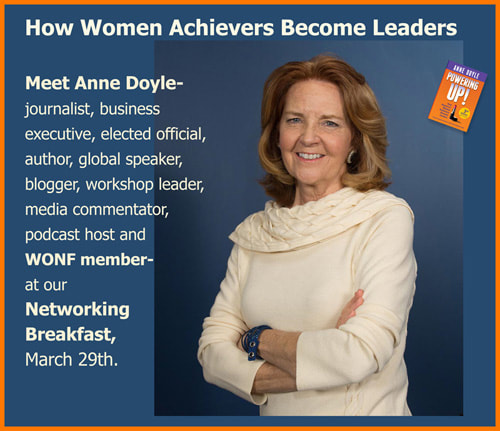 Click here to see a video recording of the presentation.﻿
​
And here is a link to Anne Doyle's web page, where you can learn more about her and learn about her wonderful new Podcast, POWERING UP! 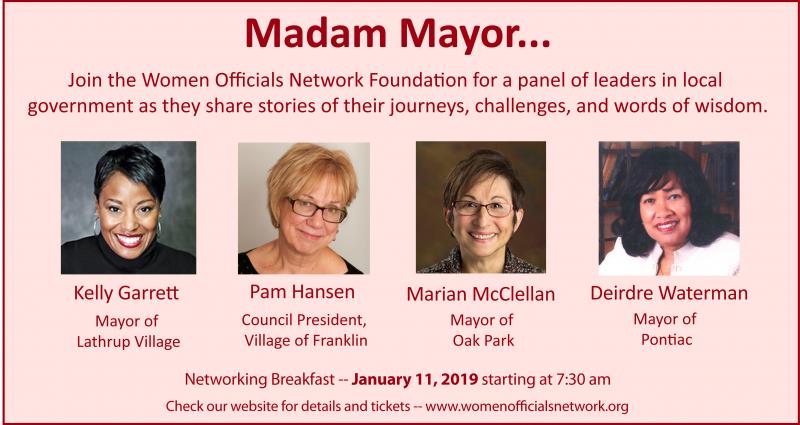 Click here to see a video of the presentation.﻿﻿​
​Jocelyn Benson and Mary Treder Lang spoke at our October 5, 2018 Breakfast.
​Jocelyn recognizes the challenges facing veterans and military families. In 2012 while her husband Ryan Friedrichs served in Afghanistan with the 173rd Airborne Brigade, she joined with four other military spouses to establish the Military Spouses of Michigan, a network dedicated to providing support and services to military spouses and their children.

Jocelyn is currently CEO and Executive Director of the Ross Initiative in Sports for Equality (RISE), a national nonprofit. She serves on several national boards including the advisory board of iCivics, a non-profit founded by retired U.S. Supreme Court Justice Sandra Day O’Connor and dedicated to engaging students in meaningful civic learning.

In 2013, Mary entered the public sector when she started at Vista Maria as Vice President of Development Program. Mary and her team worked with vulnerable youth in an effort to help them successfully transition into adulthood with life and workforce development skills to succeed and contribute to their communities. Recently Mary moved to the newly created position of Vice President of Major Gifts.

She is active in her community as a member of the St. Paul's Catholic Church, the Fraternal Order of Police (FOP), the Grosse Pointe Chamber, and Past Commodore of the Grosse Pointe Yacht Club. She is also active in philanthropic efforts for the Michigan Women's Foundation, March of Dimes, Forgotten Harvest, Leukemia Lymphoma Society, the American Cancer Society and Vista Maria.

Mary has been happily married to Paul Lang for thirty-two years, with whom she has raised three children and has welcomed a son-in-law into their family.
A judicial Panel: Judge Lisa Langton, Supreme Court Justice Bridget Mary McCormack, Judge Maureen McGinnis
​Moderated by Judge Cynthia Walker.
​She also teaches a Master Your Message communication course to organizations and corporations. The course is an intensive workshop that teaches an advanced communication model designed to shift office-place communication culture into high gear to team-strengthen in order to work better, sell better, be better.

A published author, her first novel series DEADLINE! won recognition from the International Thriller Writers organization, the Virginia Book Festival and the Hollywood Book Festival.  A prolific writer and self-taught screenplay writer, her first project, The Turnaround Girl, caught the attention of Professor Richard Walter, Chair of the UCLA graduate screenwriting program who became her private tutor and mentor.  Paula is currently shopping her latest unpublished novel as a treatment for a Detroit-based serial television drama, and is looking for a producer for her first two movie screenplays.  Winning an Oscar for screenplay writing is on her bucket list.

Paula lives in suburban Detroit with her husband and three beautiful and brilliant step-daughters.
​She was Vice-Chairman of NOMC Hospital (now Doctors Hospital) and  Chair of the Finance Committee. She was the founding President of the Friends of the Pontiac Public Library.

Since 2006 Dr. Waterman has held elective office in the City of Pontiac.

Dr. Waterman was married to the late Judge William Waterman, they raised their two children here in Pontiac. She is an active member of Plymouth United Church of Christ.
​As a Councilwoman, Ms. Lawrence gained experience in managing a multi-million dollar budget and demonstrated fiscal responsibility. Ms. Lawrence has also served on the Southfield Public School Board of Education as President, Vice-President, and Secretary. Her love for community involvement has been evident through her previous service as a volunteer in various capacities on the Parent Youth Guidance Commission, Oakland County United Way Advisory Committee, and Oakland County Aids Council.

Since becoming Mayor, Ms. Lawrence has initiated the following community programs: The Mayor’s Walk community health program; Mayor’s Roundtable - a citizen driven forum where residents can discuss one-on-one topics of concern; Southfield Reads! - a program designed to promote reading literacy in the City of Southfield; Annual Flower Day; City-wide Blood Drive; and Today’s Woman - a cable show featuring respected women in and around Southfield. As a result of her active concerns to create a more environmentally friendly community Mayor Lawrence joined over 600 other Mayors in signing the Mayors Climate Protection Agreement, and with Council support has created the Southfield Green Committee. Mayor Lawrence plans to continue her active involvement in pushing for smarter energy use.

Mayor Lawrence has received many honors for her leadership skills and commitment to diversity. She was recognized in October 2007 as one of Crain’s “2007 Most Influential Women.” She has also received the “2004 Wand Award” for breaking new frontiers for women and minorities, the Jewish War Veterans-State of Michigan “Brotherhood Award,” the Leadership Detroit “Challenging the Process” award, the ABWA Millennium Chapter “Woman of the Year Award,” the Detroit Historical Society’s “Enterprising Women” award, Leadership Oakland’s 2004 Distinguished Leadership & Future Leaders Award for Exemplary Leadership, and the “Black Women Achiever Award.” Mayor Lawrence has also been named to the Women’s Informal Network “List of the Most Influential African American Women in Metropolitan Detroit” and CORP Magazine’s “95 Most Influential Women in Michigan.” Through a survey of area leadership organizations, Ms. Lawrence was identified by Crain’s Detroit Business as a regional leader with the “skills and determination to bridge the historic parochialism of the metropolitan area.”

Nicole Johnson is an innovative manager with an exemplary record of leading marketing and program development efforts for non-profit organizations and businesses. Highly skilled in developing creative solutions to difficult challenges, Nicole has been recognized for her team leadership and ability to establish rapport and credibility with diverse groups which has been key to her success in her current position as Coordinated Services Project Manager at HAVEN where she plans and directs programmatic activities, identifies and recruits strategic alliances, and manages partner relationships.
Friday, October 4, 2013: John Philo, Legal Director, Maurice & Jane Sugar Law Center for Ecnomic & Social Justice
Friday, October 10, 2014 - Ms. Christine Jensen, Political Strategist
​This year she and Mayor Brenda Lawrence got the band back together and Jensen managed Lawrence's successful run for the 14th District primary.  Upon her election in November Mayor Lawrence will be the first African American and first African American woman from Oakland County to represent Oakland County in Congress. Mayor Lawrence will be the 4th African American woman to represent Michigan in Congress.

Ms. Jensen serves on the executive board of the Michigan Democratic Party, the executive committee of the Oakland County Democratic Party, the Justice Caucus and the 9th District, and serves as vice-chair for the Birmingham-Bloomfield Democratic Club.
Chris has a B.S. in Business from Minnesota State University at Moorhead and a J.D. from Depaul University in Chicago.
​Friday, December 12, 2014 - Ms. Anise Hayes, Co-Founder and ED of Atlantic Impact
Friday, February 27, 2015 - "How To Support Women Entrepreneurs," Nicole Farmer
​In addition to helping adults achieve their business goals, Farmer serves as a coach for the Motown EDU Summer Camp for Teens where she helps students develop business plans and formally “pitch” their visions to a judging panel of corporate and civic leaders.

Farmer is a sought-after speaker due to her knowledge of professional strategies and fund development. As a member of the Detroit Collaborative consortium that includes the Michigan Women’s Foundation, Detroit Development Fund, and New Economic Initiative, she provides a distinctive voice.
​
Nicole Farmer resides in Detroit with her husband, Bishop Keith Farmer, and their sons Devin and Sebastian.
​Friday, October 16, 2015  - "Raising Productivity by Elevating the Communication Culture"  - Paula Tutman
​She is the founder and board chair of the 501c3, non-profit charitable organization, Children’s ToothFairy Foundation which provides dental care and oral health education to uninsured children in Southeastern Michigan. She also teaches a Master Your Message communication course to organizations and corporations. The course is an intensive workshop that teaches an advanced communication model designed to shift office-place communication culture into high gear to team-strengthen in order to work better, sell better, be better. A published author, her first novel series DEADLINE! won recognition from the International Thriller Writers organization, The Virginia Book Festival and the Hollywood Book Festival.

A prolific writer and self-taught screenplay writer, her first project, The Turnaround Girl, caught the attention of Professor Richard Walter, Chair of the UCLA graduate screenwriting program who became her private tutor and mentor. Paula is currently shopping her latest unpublished novel as a treatment for a Detroit-based serial television drama, and is looking for a producer for her first two movie screenplays. Winning an Oscar for screenplay writing is on her bucket-list.

As a farm girl originally from the Chesapeake Bay region, if Mother Nature made it, she enjoys it. Paula has collected adventure points competitive sailing, horseback riding, flying (not riding, flying) an F-16 fighter jet, crashing a motorcycle, performing in an opera, and opening the circus as a clown.

​She’s witnessed the great polar bear migration in the Canadian sub-Arctic and photographed Bushmen in Senegal. In 2009 she took on her most extreme adventure underneath a crop of overgrown Evergreens at the tidal basin of an Alaskan glacier by getting married for the last time. She lives in suburban Detroit with her husband and three beautiful and brilliant step-daughters.
Support Us