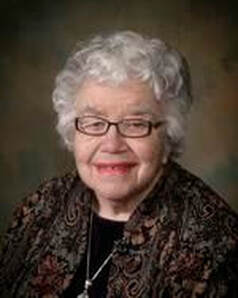 We note the passing of Ann Arbor attorney, Jean Ledwith King, who championed gender equity during her long career. She passed away at the age of 97.

Read more about her career and work to fight for gender equality in this Detroit Free Press Article.

Another source of interesting information about this trailblazing leader for women's rights can be listened to here, in a remembrance broadcast on NPR. ​
Congratulations to all the Women who stepped up to run for office last year, or who have applied for an appointed public position! ​​
Here is a list of all the women appearing on a ballot in Oakland County on 11/2/21.
We'd love to make a similar list of all those who have applied for an appointed position.
If you are one such woman, let us know by leaving a message here.
Very happy to share the news about a member of our community being appointed to the Federal Bench. Oakland County Circuit Court Chief Judge Shalina Kumar has been nominated to the Federal bench!

Below is an excerpt from the White House announcement of new judicial nominations, posted on June 30, 2021. Read the full announcement here.
​ 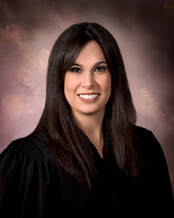 "SHALINA D. KUMAR
Nominated to the United States District Court for the Eastern District of Michigan

Chief Judge Shalina D. Kumar has served on the Oakland County Sixth Circuit Court since 2007. She was appointed Chief Judge of the Circuit Court by the Michigan Supreme Court in January of 2018. In addition to her chief judge duties, Judge Kumar retains a full caseload covering both civil and criminal matters. Throughout her years on the bench, Judge Kumar has served as a presiding judge of the Adult Treatment Court, the Chairperson of the Oakland County Criminal Assignment Committee, the bench liaison to the Oakland County Bar Association Circuit Court Committee, a member of the Michigan State Bar Professionalism Committee, and a member of the Executive Committee of the Michigan Judges’ Association....
​Women’s History Month: 10 Awesome Michigan Women
From Awesome Mitten, a wonderful article by Margaret Clegg highlighting ten Michigan Women. Special thanks to the Greater West Bloomfield Historical Society for reprinting the article in their Spring 2021 newsletter.
Here is an excerpt from the article:

International Women’s Day started as a way to promote equality for women more than a century ago, and that effort eventually led to March becoming recognized as National Women’s History Month.
​
Our culture and skillsets have made impacts near and far, and organizations such as the Michigan Women’s Historical Society strive to celebrate women every day.

Whether their name is famous across the globe or their legacy endures quietly, here are 10 women from the mitten state worth celebrating during Women’s History Month:

Read all about these women and see their pictures in the article, here.

From Popsugar.com, published on February 8, 2021 and written by ERIN LOOS CUTRARO
If You Care About Your Community, It's Time That You Consider Running For Office.
Here is an excerpt from the article:
​
There's been a lot of discussion about the progress women have made in politics, sparked by an election in which a record number of women ran for congressional seats and even the nation's highest office. Women also voted in record numbers in the 2020 election, fueled by grassroots organizing and activism at a national scale.

But progress does not start or end with a single election...

Right now, women represent less than a third of those serving in public office, even though we make up 51 percent of the US population. It's time to forge a new path for the future, and I'm here to tell you that you, or someone you know, is qualified to run for office and lead the way.

Now I know what you may be thinking: I'm not qualified. Maybe someone else who has the answers will step up. Here's the deal: you are that someone...
[Read the full article by clicking on the title]
Female leaders have gotten used to threats, harassment. It's time to change that.  ​
Here is an excerpt from the article:
" Decades of research shows that all of us — men and women — benefit when women are in leadership positions. More women in executive management increases a company’s profitability. Female members of Congress bring more federal dollars into their districts. Most recently, many have started examining the positive impact a female head of state has on a country’s success in fighting the coronavirus.

Far too often, though, these same leaders must operate within a culture where criticism comes with a heavy side dish of gendered language, violent sexual imagery and graphic death threats...
​
From The Washington Post, Published August 9, 2020, written by Samantha Schmidt
Thousands of women fought against the right to vote. Their reasons still resonate.
What follows is an excerpt (link to article clicking the title above):

​Susan B. Anthony stood on a stage in Upstate New York, asking a crowd to support the suffragist cause, when someone in the audience asked a question: Do women actually want the right to vote?

Her answer was hardly unequivocal.

“They do not oppose it,” Anthony replied vaguely.
She had little reason to believe otherwise, as recounted in Susan Goodier’s book, “No Votes for Women: The New York State Anti-Suffrage Movement.” It was 1893, and suffragists were traveling across New York to build support ahead of a constitutional convention, when lawmakers would decide if the word “male” should be removed from the wording of the state constitution. Until then, most of the opposition to women’s suffrage had been dominated by men.

From NPR Radio, Published June 17, 2020, written by Susan Davis
More Republican Women Than Ever Are Running For Congress: Here's Why﻿​
​What follows is an excerpt (link to article by clicking the title):

A familiar tale is unfolding in American politics in 2020: women are once again setting records as candidates for Congress. While the 2018 midterms saw a historic wave of Democratic candidates and general election winners, this time the surge in candidates is among Republican women running for the House.

When the dust settled after the 2018 Democratic wave, the ranks of Republican women had been decimated. Just 13 were left standing...

Rep. Susan Brooks, R-Ind , who is not seeking reelection, was tapped to serve as candidate recruitment chair for the House GOP's campaign operation. Along with Rep. Elise Stefanik of New York, they set out to recruit more women to run this year.

From The New York Times, Published May 15, 2020 (revised May 18th) and written by Amanda Taub
Why Are Women-Led Nations Doing Better With Covid-19?﻿​
What follows is an excerpt (link to article by clicking the title):

A new leadership style offers promise for a new era of global threats.
Monday was a day of triumph for Prime Minister Jacinda Ardern. Thanks to the efforts of the entire nation, she said, New Zealand had been largely successful in meeting its ambitious goal of eradicating, rather than just controlling, outbreaks of Covid-19. The lockdown she had put in place on March 25 could now end.

Ms. Ardern’s success is the latest data point in a widely noticed trend: Countries led by women seem to be particularly successful in fighting the coronavirus.

Germany, led by Angela Merkel, has had a far lower death rate than Britain, France, Italy or Spain. Finland, where Prime minister Sanna Marin, 34, governs with a coalition of four female-led parties, has had fewer than 10 percent as many deaths as nearby Sweden. And Tsai Ing-wen, the president of Taiwan, has presided over one of the most successful efforts in the world at containing the virus, using testing, contact tracing and isolation measures to control infections without a full national lockdown.

We should resist drawing conclusions about women leaders from a few exceptional individuals acting in exceptional circumstances. But experts say that the women’s success may still offer valuable lessons about what can help countries weather not just this crisis, but others in the future.

From The Detroit Free Press, published on May 1, 2019 and written by Tresa Baldas:
Congress Fights to Save Historic Female Genital Mutilation Case
​What follows is an excerpt (link to article by clicking the title):

In a move that could revive Detroit's historic female genital mutilation  prosecution, Congress has intervened in the case, saying the Department of Justice gave up too easily on the law that makes the cutting practice illegal.

Months after a federal judge in Detroit declared the law unconstitutional, the DOJ announced last month it would not appeal the decision because it concluded the 1996 FGM statute was too weak to defend.

Several congressional leaders disagree and have intervened in the case, hoping to convince an appeals court that the law is valid and can pass constitutional muster.  If successful, this would allow prosecutors in Detroit to take two doctors and six others to trial for allegedly subjecting nine minor girls to FGM, including some who cried, bled and screamed during the procedure...

From StoryBench --Exploring the future of digital storytelling from Northwestern University's School of Journalism, Published on March 29, 2019 and written by Alexander Frandsen and Aleszu Bajak .
Women on the 2020 campaign trail are being treated more negatively by the media﻿
​What follows is an excerpt (link to article by clicking the title):

​Female candidates running for president are consistently being described in the media more negatively than their male counterparts. That’s what we’ve concluded after an analysis of 130 articles from mainstream news outlets. It’s a disconcerting trend in the 2020 election coverage.

We pointed this out in our first Storybench 2020 Election Coverage Tracker update last month. But with the addition of 70 more articles to our database, the picture has become even clearer. ..

​A History Lesson on WHY Women CAN Vote Today

Contributed by Liz Bauer, Nominating Committee Chair
​This is about our mothers and grandmothers 100 years ago.
​Remember, it was not until 1920 that women were granted the right to go to the polls and vote.

​​The women were innocent and defenseless, but they were jailed while picketing the White House, carrying signs asking for the vote.

By the end of the night, they were barely alive.  Forty prison guards, wielding clubs and their warden's blessing, went on a rampage against the 33 women.

They beat Lucy Burns, chained her hands to the cell bars above her head and left her hanging for the night, bleeding and gasping for air.
​They hurled Dora Lewis into a dark cell, smashed her head against an iron bed and knocked her out cold. Her cell mate, Alice Cosu, thought Lewis was dead and suffered a heart attack. Additional affidavits describe the guards grabbing, dragging, beating, choking, slamming, pinching, twisting and kicking the women.

Thus unfolded the 'Night of Terror' on Nov. 15, 1917, when the warden at the Occoquan Workhouse in Virginia

Guards were ordered to teach a lesson to the suffragists imprisoned there because they dared to picket Woodrow Wilson's White House for the right to vote.  For weeks, the women's only water came from an open pail.

​When one of the leaders, Alice Paul, embarked on a hunger strike, they tied her to a chair, forced a tube down her throat and poured liquid into her until she vomited. She was tortured like this for weeks until word was smuggled out to the press.
All these years later, voter registration is still my passion. But the actual act of voting had become less personal for me. Frankly, voting often felt more like an obligation than a privilege. Sometimes it was inconvenient.

What would these women think of the way I use - or don't use - my right to vote?  We take it for granted and we are not voting in the numbers that we should be.

​Articles of Interest about Women in Office or Running for Office

From the Globe and Mail-- an article with a close look at several movements in Oakland County this election cycle, spearheaded by woman.
"Meet the swing voters: In the U.S. midterms, women are a potent force﻿."